It all started when I was lured in by an adorable shop front that was just around the corner from the hotel. Isn't it cute? Love the sign and those little pink trees. 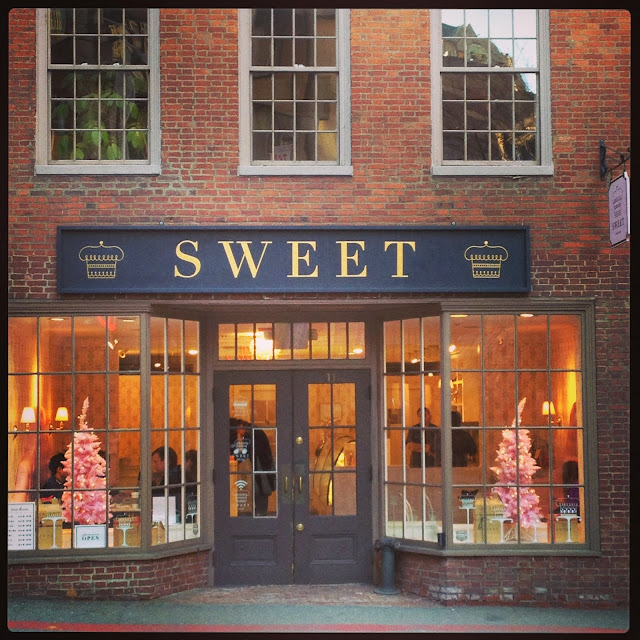 Sweet is located in the Downtown district at 11 School St.

We decided to keep it old school and go with the classics, a double vanilla and a double chocolate.
They were both excellent.
I love that they sell minis because smaller is just cuter.

Also there is something about the cake to frosting ratio that is so much better on small cupcakes.
Not to mention the small size allows for more variety.
Both cakes were moist, but not too moist. I don't like my cake to be overly moist because it reminds me of a cake mix.
The crumb was good and consistent, but not too fine. (another trait of a mix)
The frosting was good too, very buttery and not too sweet. The vanilla had real Madagascar vanilla in it that you could definitely taste.
My only regret is not going back to try more flavours.
For the holidays they have Butterscotch, Snowball, Candy Cane and Gingerbread cupcakes. 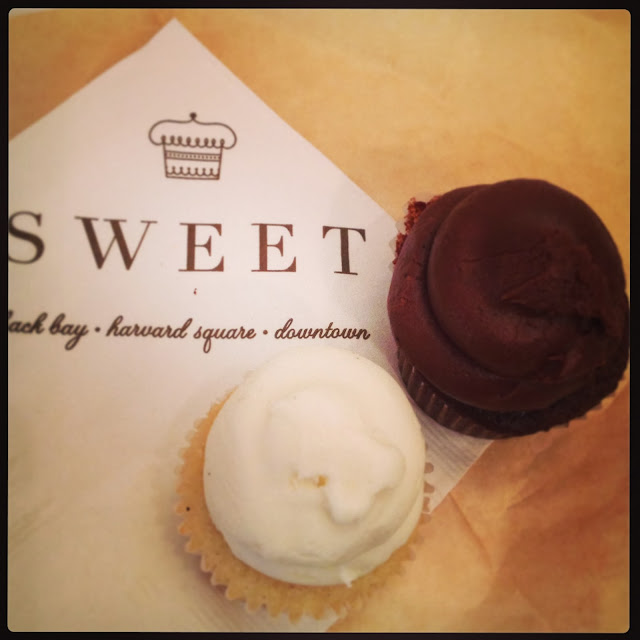 Next we headed across the street to Cakeology.

Cakeology is conveniently located about 10 steps away from Sweet.
Here we went all crazy and ordered 4 cupcakes. 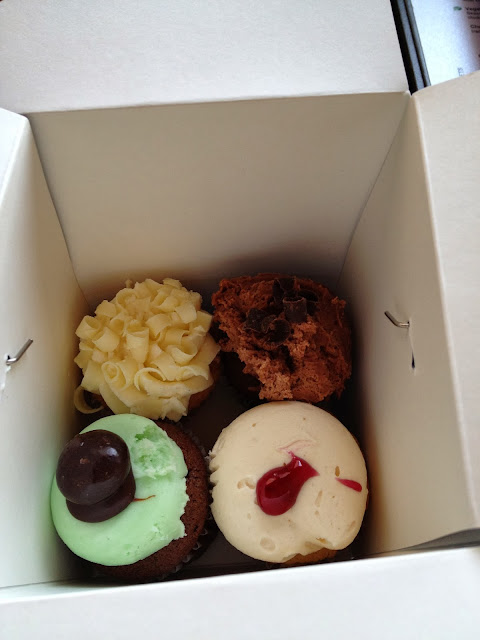 They were all really good!

The top left is the Vanilla Vanilla with Tahitian vanilla bean frosting and white chocolate curls.
Top right is German Chocolate with coconut, carmel and pecan frosting.
Then we have the Chocolate Mint topped with mint frosting and a Junior Mint and then last, but not least the Peanut Butter and Jelly cupcake.
All the cakes were moist and tender with a good structure. (Not too moist)
Each little cupcake packed a flavour punch. They were all very tasty and not too sweet.
The Peanut Butter and Jelly tasted just like a peanut butter sandwich and the German Chocolate icing was amazing, almost like fudge. 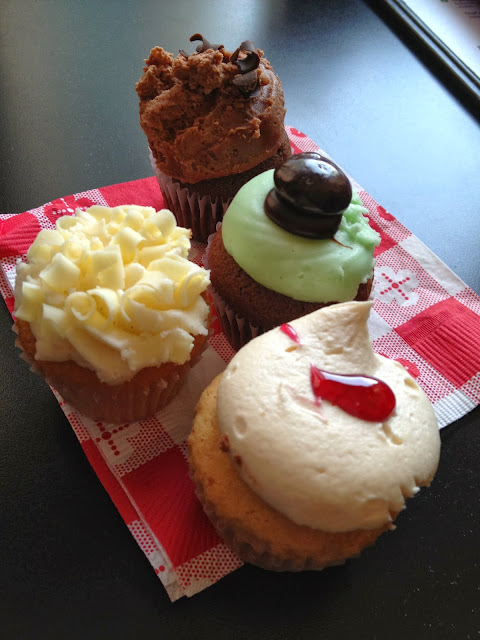 We then headed across the Common to Beacon Hill and as we were touring the charming Charles Street, I spied Isabelle's Curly Cakes.

Probably at this point a normal person would just keep walking, but I thought: I have come this far on the cupcake journey what's one more?
Unfortunately they didn't have any minis.
I went with what I thought was the Vanilla Bean, filled with pastry cream and topped with buttercream frosting.
But, now that I look at the photo the icing looks pink?
Could it have possibly been a Strawberry Vanilla? Oh well, maybe I was in a diabetic coma and blacked out.
I do remember that there was too much icing, but the cake was really buttery and dense, just like my momma makes!
And it came in a cute little cupcake "suitcase". 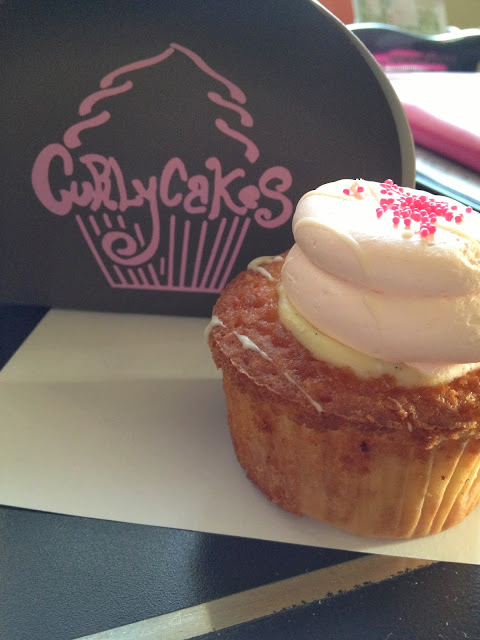 Ok, now this is when things get serious. On the next day we toured my absolute favourite part of Boston, The North End Italian area.
There are so many amazing Italian places to eat that it is nearly impossible to choose.

After eating the best antipasto ever with a side of meat balls and with of course massive quantities of bread (and a diet Coke for good measure) we had no intentions of carrying on with the cupcake tour....but, as we rolled ourselves out of the restaurant this is what we saw...Lulu's Sweet Shoppe. 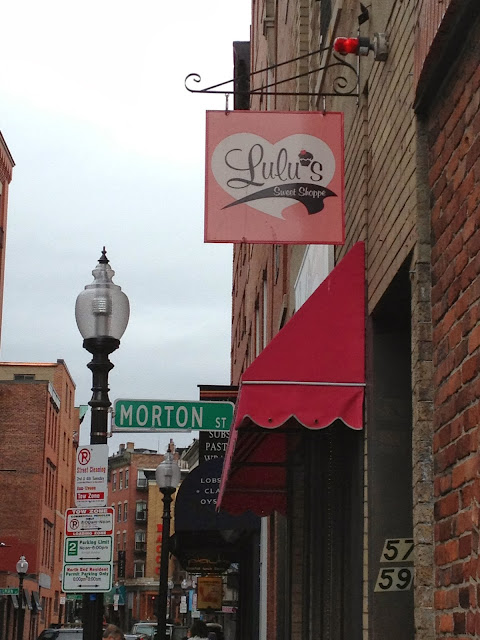 Before we entered we made a pact that we would only try 1 mini and if they didn't have minis we would walk away...well...hello cupcakes...come to mamma! 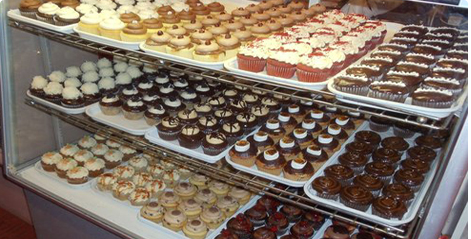 I stole this photo from their site. 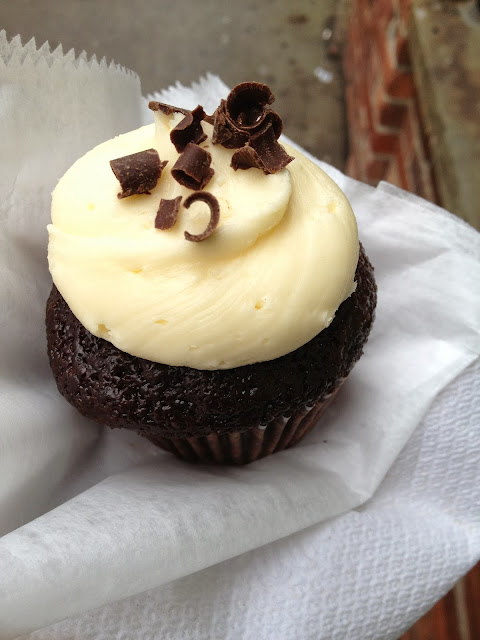 Here's what we had, a Chocolate Vanilla.
The cake was good with a rich chocolate taste, but a little too moist for me. The icing was not too sweet and had a yummy butter and vanilla taste.

And that concludes the Boston Cupcake Tour!
Next on the agenda...The Boston Italian Sandwich Tour. 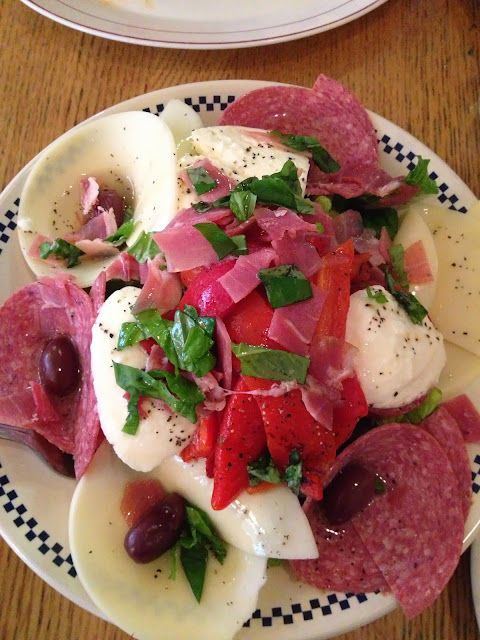 Yes, that's olive oil in each cheese and meat "cup".