After spending two weeks in Nova Scotia I've been thinking a lot about cottage design.

We are part owners of a five bedroom cottage near Digby that we share with my husbands parents and his sisters. Before we owned the cottage we would rent one on a private road on the ocean. We loved the fact that it was right on the water and that it was run like a mini community complete with a pool, tennis court, playground and a resident association that held events and also there was a main lodge that rented out rooms and served breakfast. Originally, when the cottages were build a hundred years ago, people would arrive by train and stay the entire summer. The cottages were built without kitchens because all meals were taken in the main lodge. Today the cottages all have kitchens and a few new cottages have been built.

We always thought owning a cottage in this area would be amazing, but unfortunately cottages never go up for sale; they are passed down within families. Through pure luck my husband was in London for work last year and he met a colleague from Halifax who owns a cottage on this road! Small world. He told us that he knew an owner who was thinking about selling a lot. We called him and found out that he wanted next to nothing for a lot that has 600 feet on the road opposite the ocean. We jumped at the opportunity and bought it.

While we were there last week we met up with my husband's friend and he introduced us to a couple from Toronto who have just completed a new "cottage". I have put cottage in quotations because it was really a full on home. They were gracious enough to show us around and I was floored by how gorgeous it was. I've seen many multi-million dollar properties before, but I have to say this is one of my favourites ever. I really wanted to ask them if I could photograph it, but I didn't want to be a pushy blogger. When the design editors at the major magazines in Toronto get wind of it I am sure it will be published.

After seeing this cottage we felt really good about our lot purchase. What we paid for the lot is what I estimate they spent on their kitchen!!

When we eventually build I would like a cottage that's..
I have just added this cottage designed by Erin Martin and published in House Beautiful to my inspiration file. It has been all over the net so many of you may have already seen it.

I am not in love with all the white furniture, but the actual construction is very appealing. I love the board walls, the white paint, the vaulted ceilings and the subtle coastal vibe. 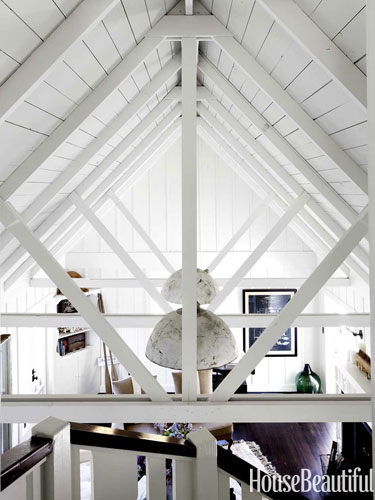 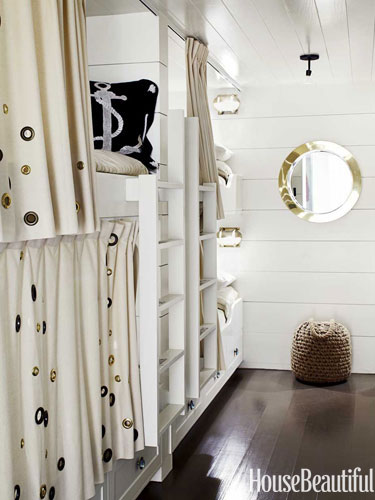 Bunk room has six beds. The grommets on the curtains are meant to look like bubbles. 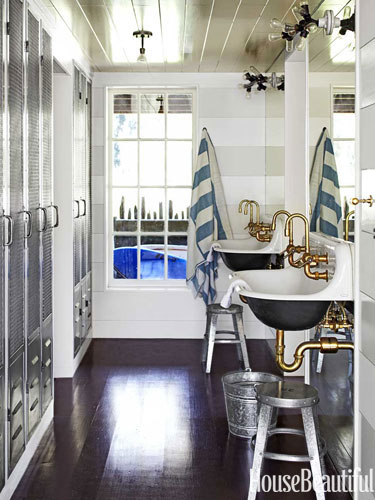 My favourite room. Each guest gets a metal locker. How cool are those sinks and faucets?
Also notice the striped wall. In the article it said that the same colour was used, alternating mat and glossy finish. 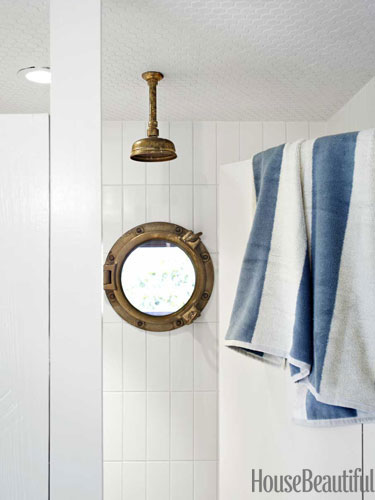 Shower head from non other than Waterworks. 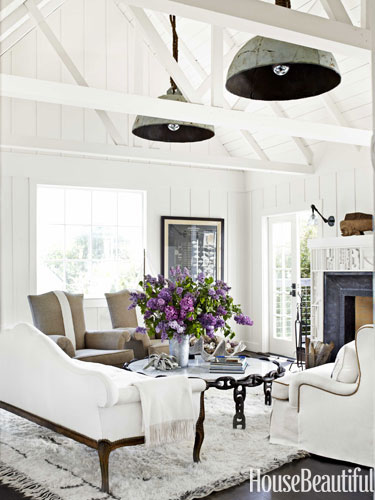 Love the wall boards and ceiling--white carpet and furniture would be a nightmare for me! 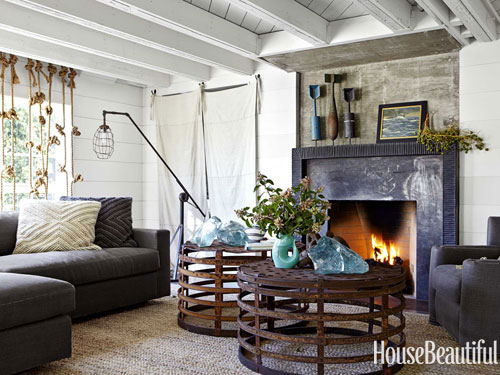 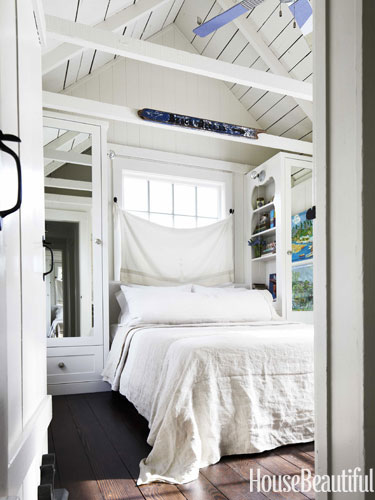 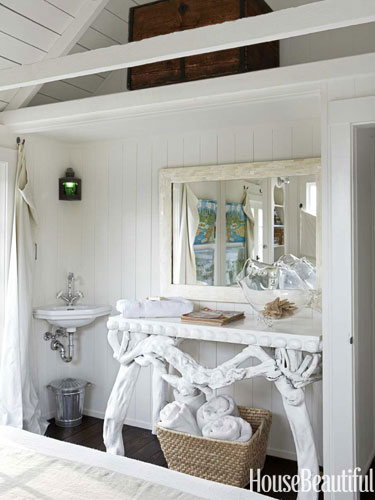 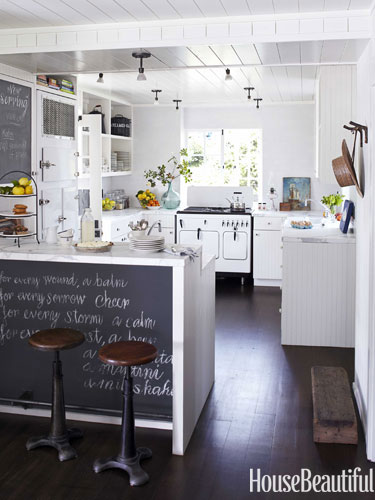 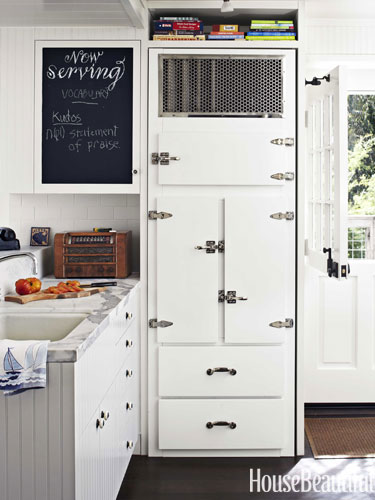 New fridge made to look like a vintage ice box. 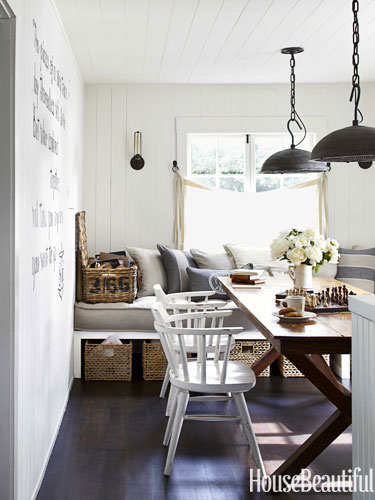 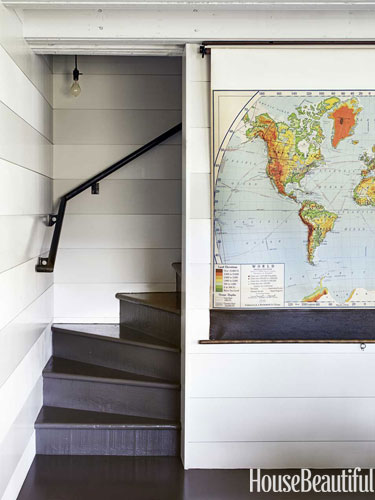 Great idea-old map pulls down to hid a TV. 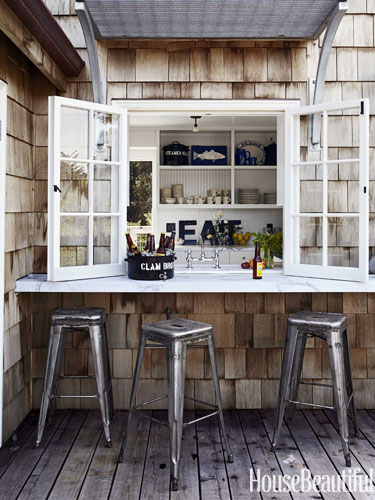 Marble counter extends out to an outdoor bar. 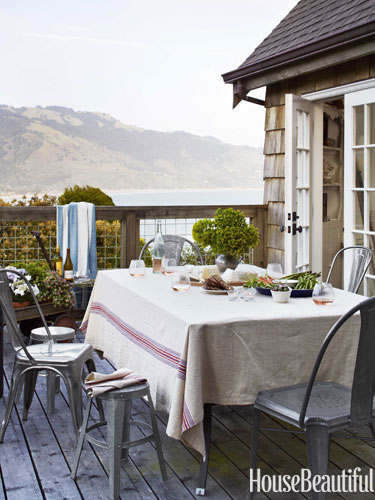 Oh, and P.S. the white paint throughout is Snow on the Mountain by Benjamin Moore.